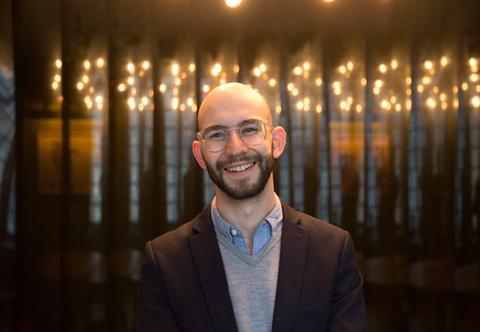 
Jonathan is the rabbi of Base Andersonville and a proud Chicagoan. Ordained by the Jewish Theological Seminary in New York, he previously cooked at numerous fancy restaurants in Chicago including the much-loved Au Cheval.

Jonathan's Jewish life is built upon food and a commitment to radical hospitality to serve Jews of all stripes. Prior to Base, he has worked with Congregation Rodfei Zedek and Mishkan Chicago, the Park Slope Jewish Center, and BBYO. Jonathan has also studied under Rabbi Benay Lappe of SVARA, a queer-oriented, "traditionally radical" yeshiva in Chicago.

Jonathan is married to Hannah, and together they raise their super rad kiddo, Baila. Jonathan loves plucking out grooves on his Jazz bass, has trained as a shochet (Kosher butcher), is a dutch-oven bread baker, and aspires one day to be a candlestick maker. You can reach Rav Jonathan by email at rabbijonathanlev@gmail.com.