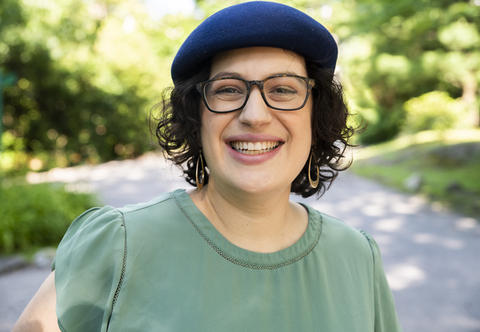 
Rav Sarah serves as the Rabbi of Base Lincoln Park, opening her home and her heart to students and young adults in Lincoln Park, Chicago. She passionately believes that Torah matters and that Judaism can enrich human life and better society.

Sarah grew up in Murray, Utah, and is the descendant of Jewish pioneers, Congregationalist ministers, and at least two different signers of the Declaration of Independence. Having discovered a new relationship to her Yidishkeit in college and several times since, she is especially excited to support you as you figure out what your Jewishness means for you!

Sarah is also a faculty member of the Shalom Hartman Institute of North America and is a nationally-regarded adult education teacher. She formerly led the Created Equal Project, and is committed to building a Jewish community which upholds the human dignity of people of all genders and uses its power ethically. Previously, Sarah has worked as a Rabbi and Jewish Educator in a variety of settings, including pulpits, social justice organizations, mikvaot, hospitals, and in formal and experiential education. Sarah has been involved in the leadership of several independent minyanim and is a lover of singing inflected traditional-liturgy davening.

Sarah has been learning Torah and building Jewish community with Rabbi William Friedman for 15 years, and happily they also got married and became the parents of two amazing kiddos, Liana and Shimon. Sarah can be reached at sarahemulhern@gmail.com